I Edition of the "Premio Palabra" 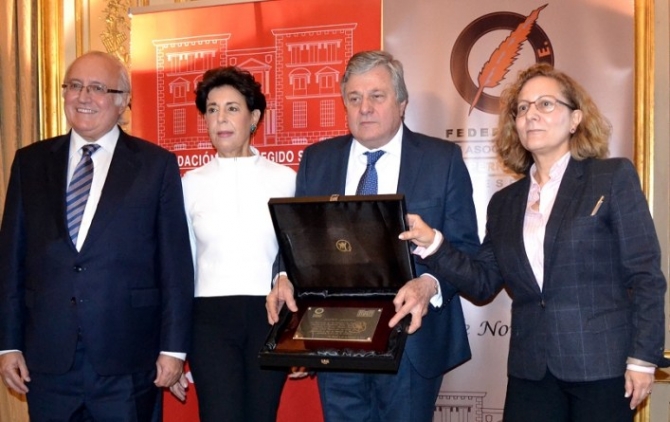 The jury unanimously granted the 2017 “Premio Palabra” Award to the Venezuelan Lilian Tintori in recognition for the use of her voice as the only and best action in defense of justice and the use of words, always firm and risky, as a definitive commitment to democracy and for peace.

The Prize, which promotes the Federation of Associations of Journalists of Spain (FAPE), with the sponsorship of the César Egido Serrano Foundation, seeks to recognize and reward people or institutions, national or foreign, that have stood out, through the use of words, in promoting coexistence, justice or social and cultural development, either through the media or any other means of dissemination

The winner, in the of the jury´s opinion, is a clear example of civil struggle and leadership with words and dialogue, as the only weapon, in defense of a more just and free society.

Lilian Adriana Tintori Parra, Venezuelan athlete and activist, is married to politician Leopoldo López, arrested and sentenced to 13 years in prison by the Prosecutor's Office and the Supreme Court of Justice, accused of inciting and leading the 2014 demonstrations. Tintori has also led resistance groups in order to get her husband free.

The purpose of the César Egido Serrano Foundation is to propose that words and dialogue are the tool to achieve harmony between different civilizations and cultures and against all forms violence, as evidenced by its motto: "Words are the bond of humankind".